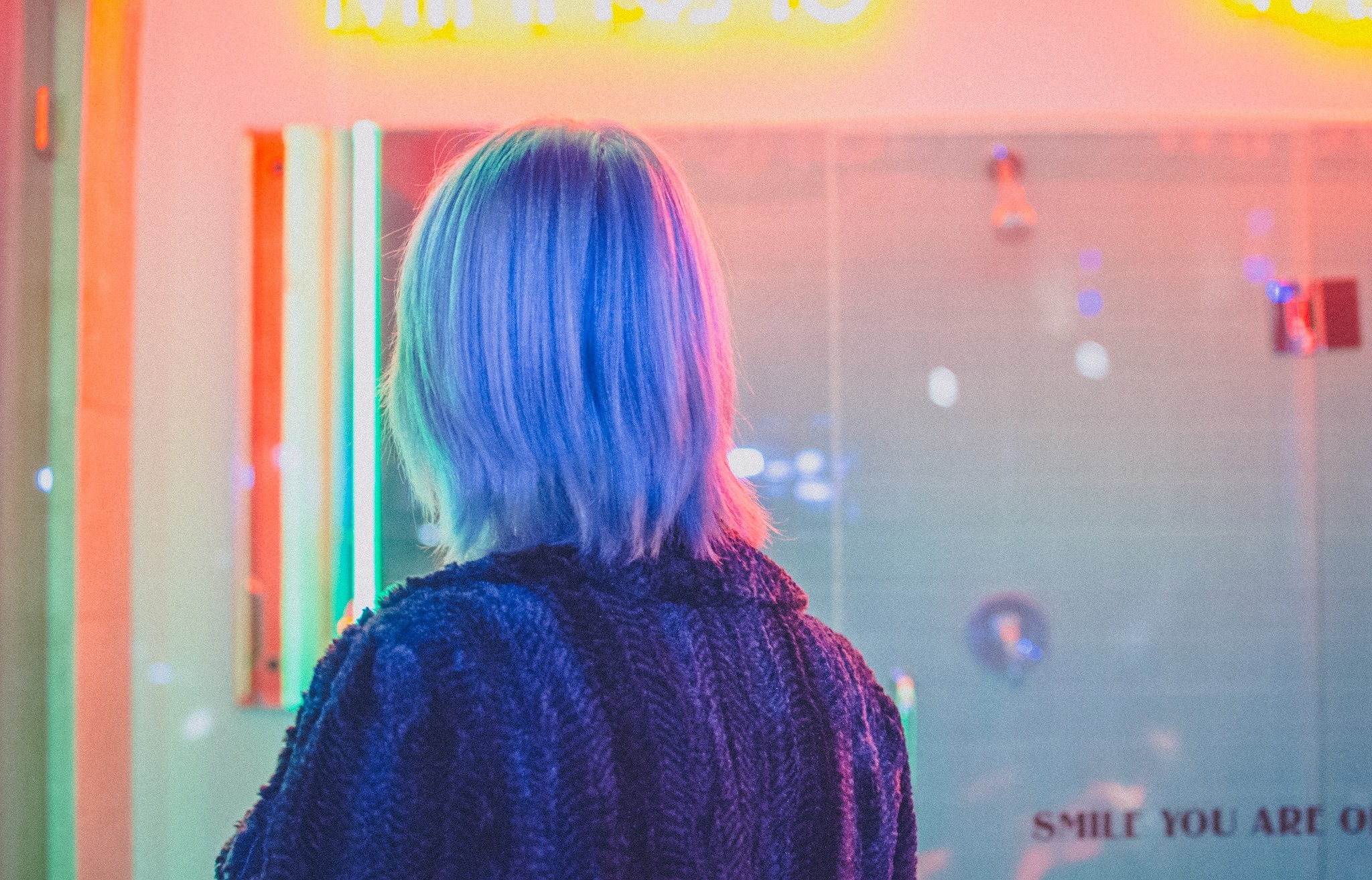 SaraOnTheInternet, Sara X Mills, the boob twerker, or Sara Mills, whichever name you may know her as, became an internet sensation for her rendition of Mozart’s “Eine kleine Nachtmusik” back in 2014. The video now has over 41 million views for her unique interpretation.

When I got a chance to do a photoshoot, I wanted to take the opportunity to know more about who she is behind the screen. I asked her to tell me a little bit about herself, the response I got gave me a peek into who she is. She isn’t just the girl that twerks her boobs to Mozart, she isn’t just a model with tattoos, she’s the girl that feels “isolated and different.” She shared something that made me question what identity meant in a world where a person’s existence is assumed on what is seen on a screen. 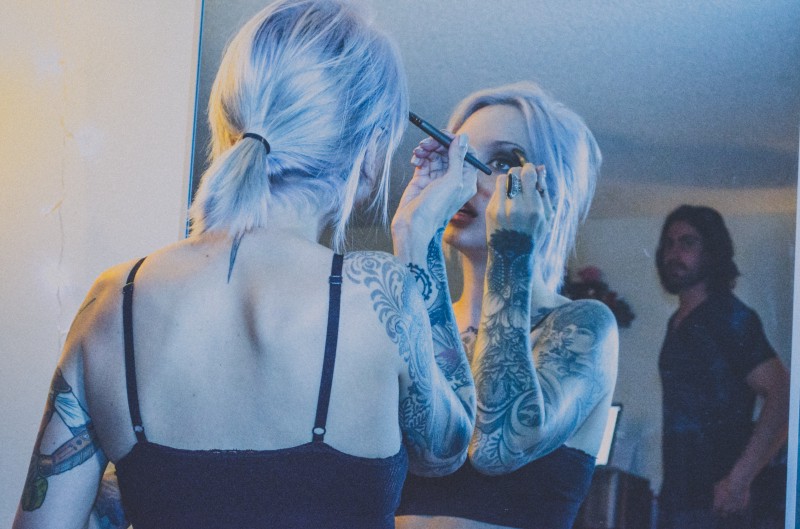 Sara and her boyfriend Patrick

“The weirdest thing about being on the autism spectrum is how I look and what I do vs. how I feel and the things I struggle with… People look at me and think I’m lying about autism because I do the things I do and I look the way I do if that makes sense.”

The statement about “being on the autism spectrum” threw me for a loop. Even after she told me, I felt doubtful, but who am I to judge her and assume that I know all there is to her. What I saw online versus what she told me caused perceptual dissonance. Behind the internet channels, the likes, and social media posts, I needed to learn about the person behind SaraOnTheInternet; who she actually is as opposed to who I assume she is from the echoes of her identity left online. 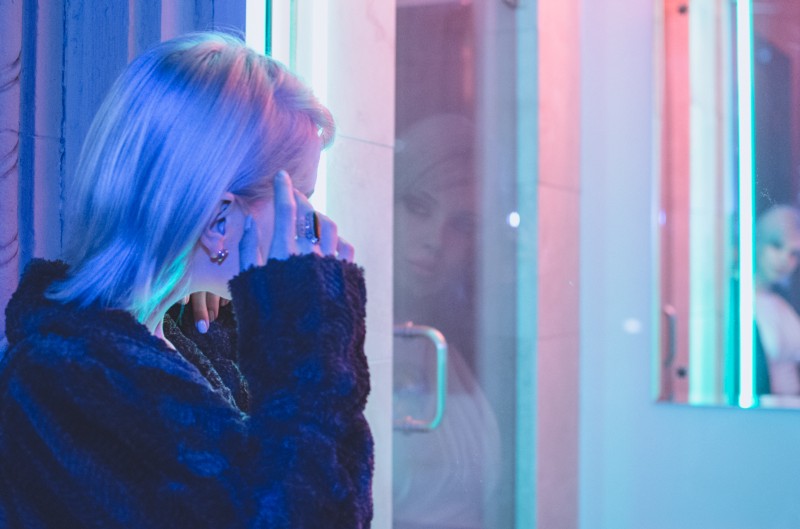 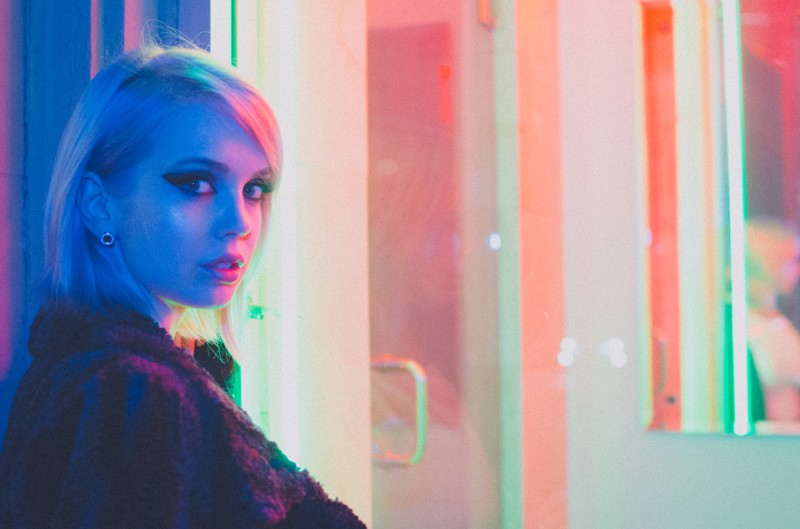 On a Saturday evening, prior to our shoot, I interviewed Sara alongside her boyfriend Patrick and their two dogs.

How did you get the idea for your YouTube video? Why Mozart?

Mills: I was writing about viral news stories freelance for a friend’s company and after seeing a few videos I realized I hadn’t seen one of anyone moving their boobs like I could do, which was something I’d been doing since I got implants in 2010. I ended up choosing classical music simply because Eine Kleine Nachtmusik was the first thing to come up in public domain recordings that didn’t sound like shit (not very good recording techniques 70 something years ago).

How has the internet fame changed your life on a day to day?

Mills: It hasn’t too…much, if anything I feel like I leave my house more. I pretty much only go out if I have something to do. It’s good because whenever I have work it forces me to leave the house. I do deal with anxiety and at certain points in my life my anxiety was so bad that it was agoraphobia, I couldn’t even leave my house.

How did the agoraphobia develop?

Mills: Maybe…, maybe normal is different for us. 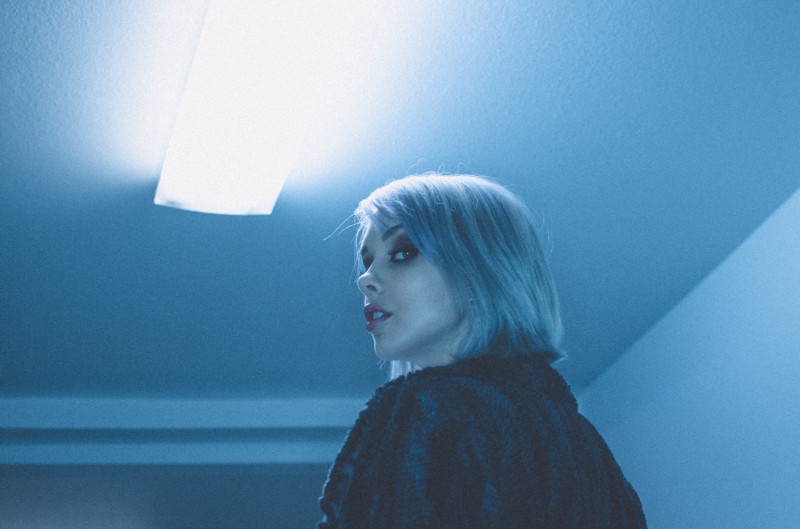 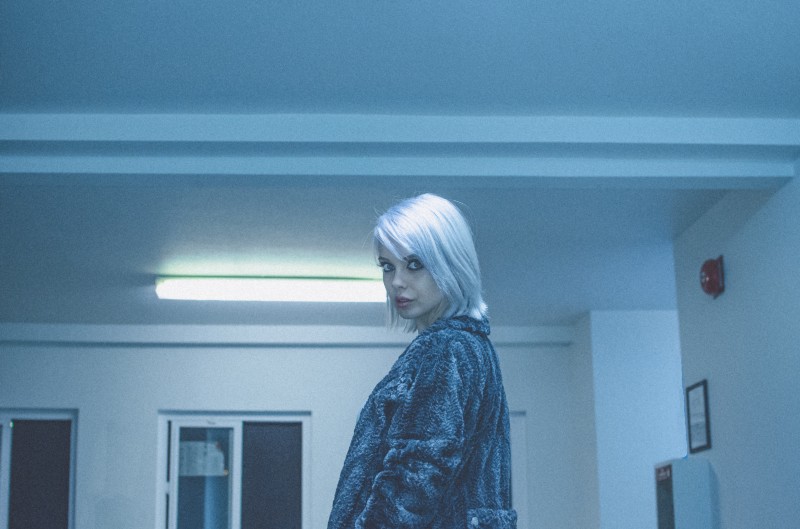 There has always been unsavory attention associated with fame, but with the zeitgeist of modern media, anyone with internet access has the potential to be propelled to stardom or pursued by unwanted admirers. By having a social media account, people now have a public identity that’s on a grander scale. It is easy to say that retreating from the digital space and not having an online identity would be the best option to avoid this issue. That individual’s receiving this level of attention is asking for it, but saying that would be a statement made without any sense of empathy. Much like most freedoms, people should have the ability to express themselves without having to fear that their actions will be dictated by anonymous aggressors. When begged with the question why not relinquish use of social media to avoid such unpleasantries? The response can only be met with another question, “would you allow others to take control of your life and dictate your behavior?”

Did you always respond and post screen-caps of the harassment you receive online?

Mills: I can’t post them publicly anymore, a few times I posted things publicly, there is such a diverse group of people that follow you. Even if it’s a few thousand, if they’re strangers there’s going to be all different kinds of people voicing their opinions.

Hoang: It would just be a ridiculous storm of opinions?

Mills: Yeah, I would post these people that would say some really awful things to me. I remember the first thing I posted to my public page, some guy messaged me on my business email to ask me how much it was to have sex with me. I was so pissed off because on what planet is it okay to message a random person and ask them what their rate is for sex? That isn’t a thing, you wouldn’t ask your barista “how much money would it take for you to fuck me?”

Mills: I put his message on my page and I got a crazy amount of backlash with people saying,

“well you’re just a bitch because you don’t care about the people who are nice and you just focus on the negative.”

Mills: One of the biggest things I got on my page was “ignore the haters,” which is one the stupidest and most patronizing things I think anyone can say.

Hoang: They might have meant that you shouldn’t respond because giving these people your attention is what they want.
Mills: Yes, but to an extent, these people need to be told that what they are doing is not okay. Sometimes when people say really shitty stuff to me and I respond, they’re like,

Hoang: It’s an interesting thing how you can post images of yourself online and people assume you’re not a real person?

Mills: Yeah, it’s pretty wild so I started posting things to my private page and my friends in real life would be like,

Mills: It bothers me that there’s so many people like this and the thing that I come across with now is there’s kids with Instagrams. I have little kids, 12 to 14 years old sending me messages like,

“hey, show me nudes you slut!” 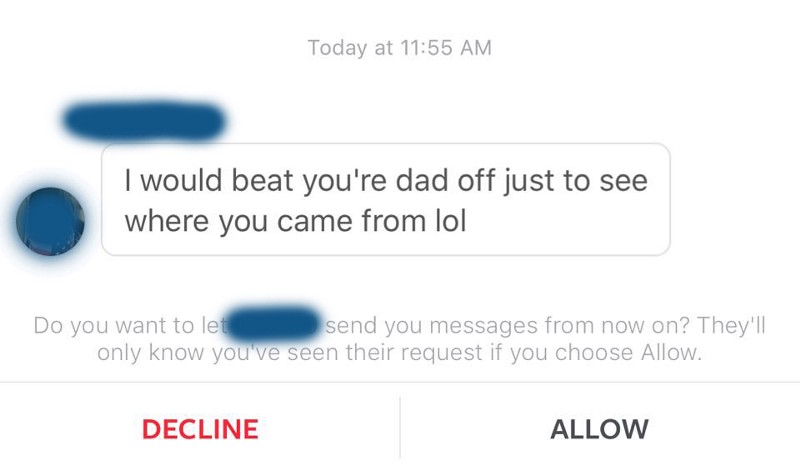 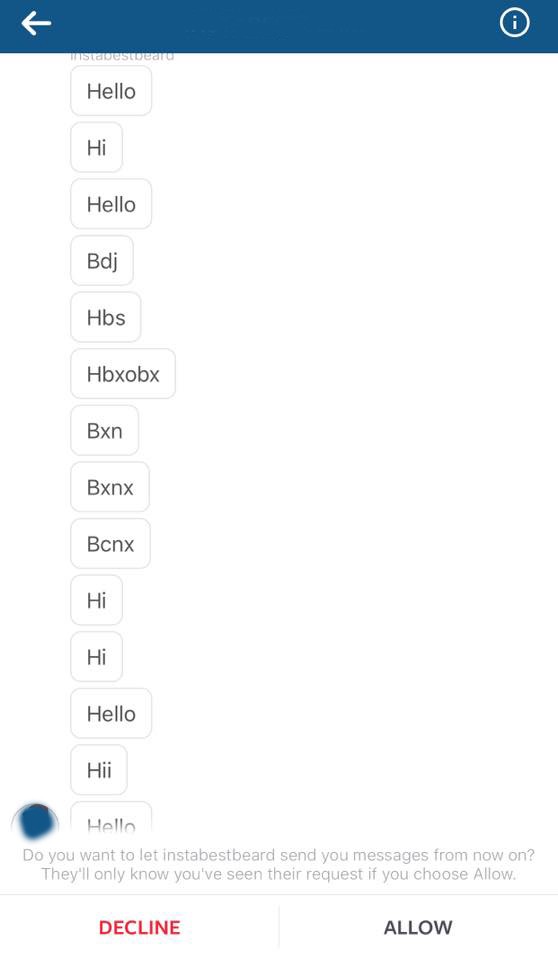 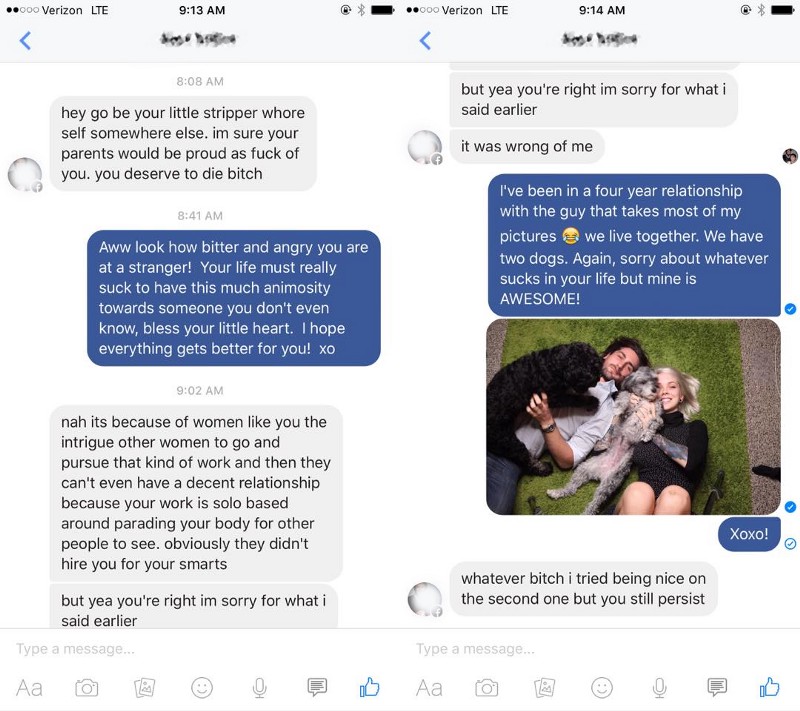 Hoang: There’s a certain disconnect people have, they don’t think of themselves saying these things to a person but to a computer. People just seem to have a detachment of responsibility because there’s a screen between them and the recipient. It’s an excuse for bad behavior.
Mills: There’s definitely elements of people thinking that it’s not real and it doesn’t matter. 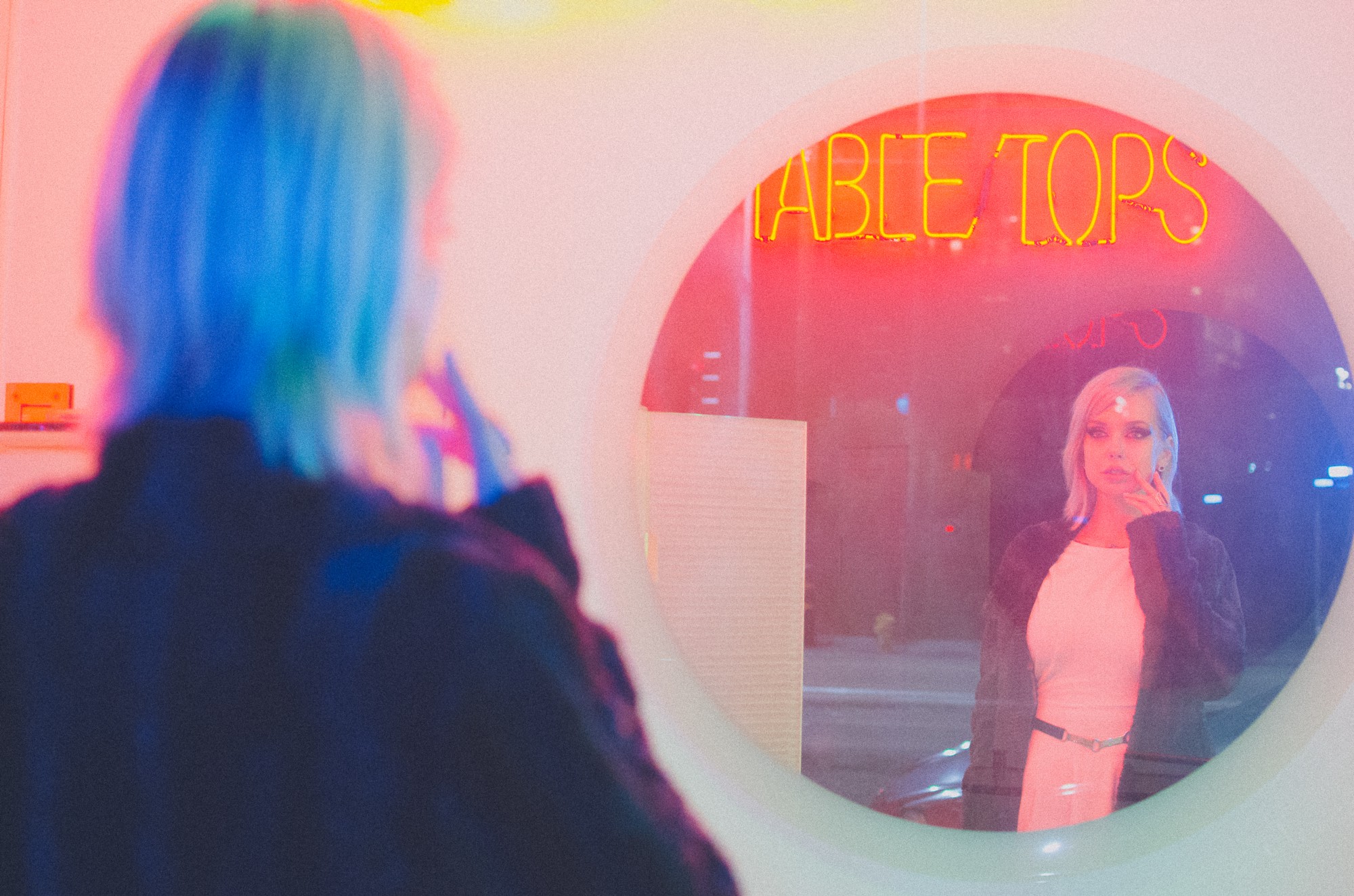 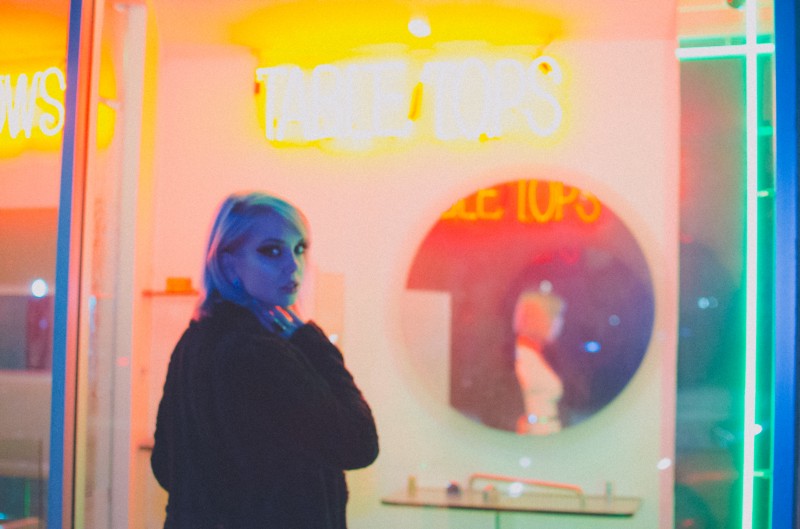 A person’s digital identity only scratches the surface of who they are, yet we often assume that we know all there is to them. We overlook the struggles and conflicts that exists for the person on the other side of the screen. Digital media fragments our identity and the identity of others. We divide our attention and ourselves into tweets, shares, and status updates, giving the world bits and pieces of who we are or at least who we want the world to perceive us to be. We crop, filter, and alter who we are to be consumable for the general public; coding moments of our lives to allow random audiences to pass judgement on our every move. When we democratize our lives for anyone who may have internet access, where does our true self start and our digital identity end? From what we see on screen, can we say we really know the StrangerOnTheInternet?